After a 2-week hiatus, I was finally able to start thinking about the next step with the Sketchbot prototype pieces - mold making and pulling a few resin casts. Now, I haven't done this since last Summer with the first version of Sketchbot, and I'm hoping to get something together for NYCC (which, incidentally, starts tomorrow). Suffice to say, mold making is not my forte. I don't mind sculpting the initial barriers, but the actual mixing and pouring is the messiest part of this venture. After spending an entire day prepping the pieces, the first molds were done and I proceeded to pour the first test pieces. Bad news - every piece was plauged by air bubbles, existing in both the mold and the casts. Ugh. 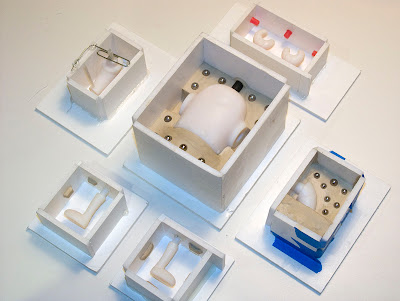 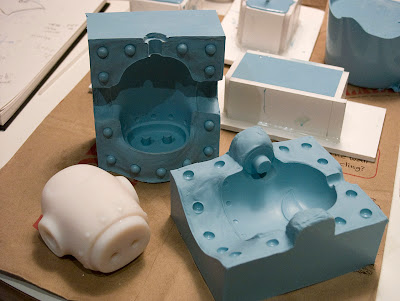 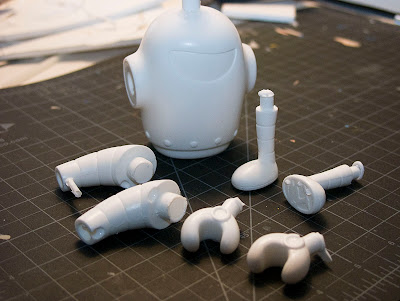 Already coming to the conclusion that I'm not going to have anything to show (or sell) by Friday, I figure since I'm already in this mode that I'll simply take another crack at making new molds, this time really paying attention to the seam lines and air vents. This evening, the molds were finished and ready for their test castings. They still exhibited a small amount of bubble holes, but were significantly better than the first run. At this stage, I'm seriously debating on whether or not I'm going to be able to pull off a successful DIY limited edition run, as every piece from here on out will require patching and repairing before painting. The good news? I do have a rock-solid 3d printed prototype that I can shop around and see about having that mass produced professionally. I'll bring those pieces with me to Comic Con, have a good time checking all the stuff out over the weekend, and eventually get a few painted up versions done from this week of tests. 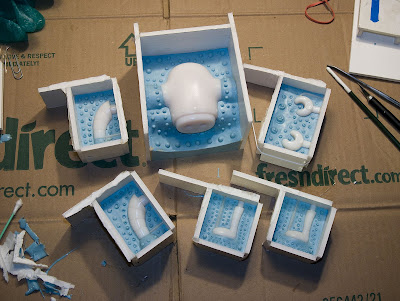 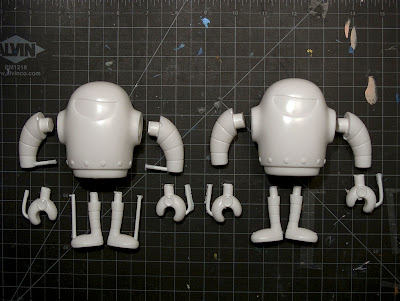 Lots more pictures up on Flickr documenting the week's work.
Posted by Steve Talkowski at 9:54 PM

Looking good Steeeeeeeveeee! Don't give up, and keep on keeping on! Have fun at NYCC!

Thanks John. I'm getting ready to head over to Javitz this afternoon for Day 1! It's all good. ;)

Thank you Rafa! Just checked out your blog, and your customs are wicked cool!