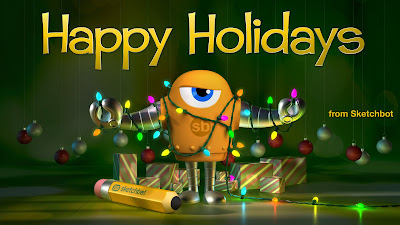 It's been an incredible year for Sketchbot. We debuted the original colourway this past June at My Plastic Heart and had them available at San Diego Comic Con in July, Variant 2 was introduced at New York Comic Con at the end of July, and the DIY blanks were announced at Designer Con in November. We also had not one, but TWO Custom Shows - the first was held at My Plastic Heart in March, and the second at Munky King LA at the end of November.  Next year we have four more exciting variants rolling out, and the possibility of Sketchbot Custom Show 3 is already in the works. I'm also participating in a few exciting shows early next year - most notably, I've been invited to do a series of Star Wars Galaxy Sketch Cards for series 6 and also will be contributing to the third New Moon show at My Plastic Heart.

Here's to a wonderful holiday season and a prosperous New Year!

P.S. Longtime readers will recognize that the above image is based on this concept from two years ago. I had always intended to bring that concept to life in 3d, and finally had some time this year to crank it out.
Posted by Steve Talkowski at 1:28 PM 3 comments: