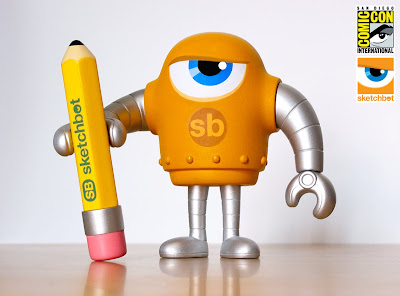 What a difference a year makes.
Last year this time I had just completed two hand sculpted and painted prototypes of the first version of Sketchbot. I brought them along to SDCC, had one on display at Toyqube's booth, and the other I carried with me and showed to whomever would stop and listen to my spiel. I received lots of positive feedback and even some constructive criticism. The plan was always to revise the character to be more animation friendly, in addition to further refining the shape and features. It was also important to settle on a cohesive branding strategy for all the various elements that comprise Sketchbot Studios.
Today, I'm proud to announce that Sketchbot is now in full production as a designer vinyl toy!
The new prototype will be on display at the DKE TOYS booth at SDCC 09. I'll be in attendance Wednesday during "Preview Night" and wrapping up my visit end of day on Friday. I'll have a batch of the newly designed stickers and business cards with me, so hit me up for some free swag if you see me wandering the vinyl toy aisles. 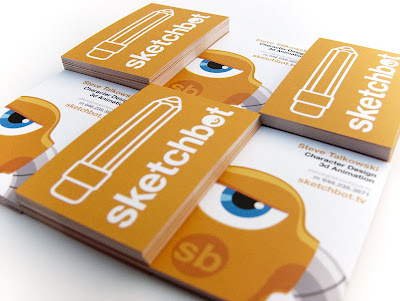 It's been an exciting journey since I first began this venture over a year ago, and the future promises a plethora of surprises for Sketchbot. See you all in San Diego!
Posted by Steve Talkowski at 8:13 PM 5 comments: