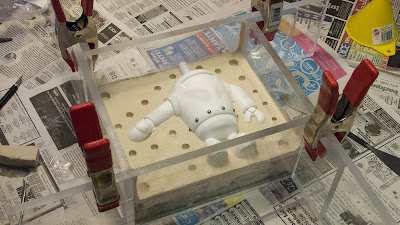 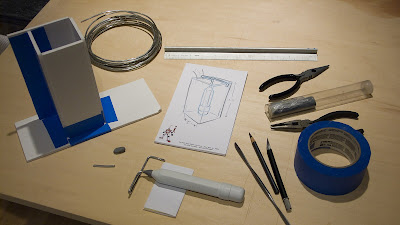 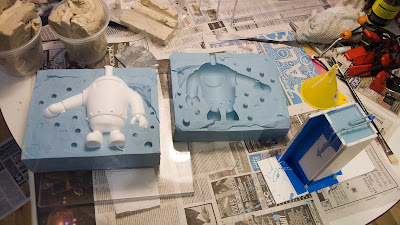 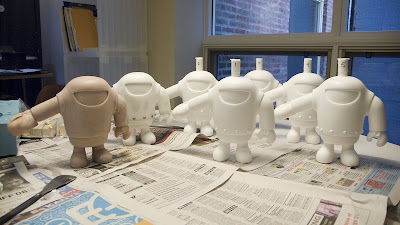 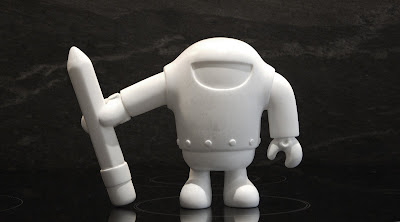 Alright, second mold completed. Five positives pulled yesterday afternoon. Pencil mold completed. Two positives pulled. I was meticulous with my use of Plexiglas to ensure a level mold, yet I had a slight problem with apparently not using enough Easy Release 200 to separate the mold halves. An X-Acto knife was needed to aid with the separation of the mold, and I inadvertently sliced into the sole region of the right foot. Every positive has a small gap in the bottom of the foot and requires a Magic Sculpt patch and sanding to level off.

Whilst machining away late into the night, I decided to grind down the rivets and see what they would look like with a flat head as opposed to a round one. I can go either way - the rounded version has a playful quality, but is also very prominent. I dunno, at this point the sculpt has taken on a life of its own, veering way off model from my original graphic. I feel the pencil is too tall by about 3/4". Like I've been telling myself throughout, this is merely the first prototype. It's the "Mark I" version of Sketchbot. I need to get this painted up and in presentable form for San Diego Comic Con next week and see what kind of reactions people have to this in person.

More documentation up on Flickr.
Posted by Steve Talkowski at 11:19 AM 3 comments: 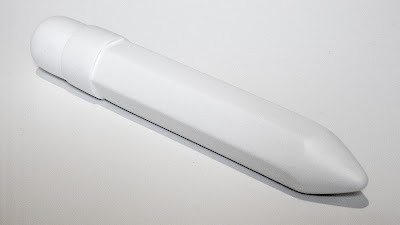 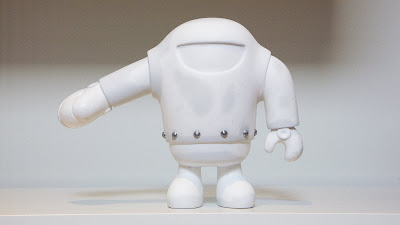 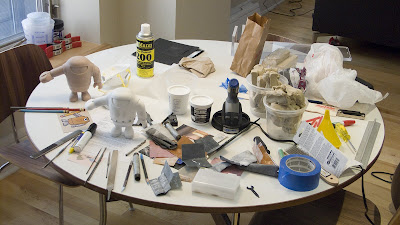 In-between 2 days of iPhone madness last Thursday and Friday I was able to get a slight amount of work done. The weekend was spent with lots of patching and sanding, and yesterday I cranked out the cartoon pencil sculpt. Today, the second mold will be constructed (and a first one for the pencil) and I'm hoping to pull a workable positive to start painting tomorrow. All this before heading out to see Ricky Gervais's later tonight!