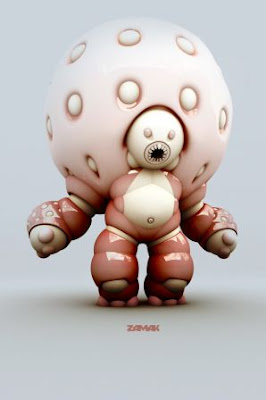 I stumbled across this incredible site earlier today whilst perusing slobot's blog. It's in French (hey Jeff, perhaps you can translate for me?) Some of the most gorgeous and original 3d work I've seen in awhile. Definitely worth checking out!
Posted by Steve Talkowski at 4:50 PM 1 comment: 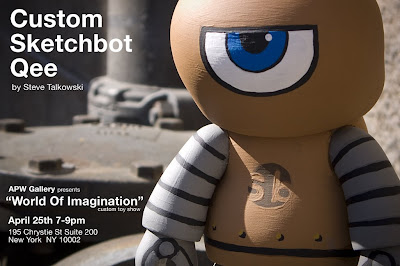 If you find yourself wandering the Lower East Side tomorrow night, swing by APW Gallery and check out the "World Of Imagination" custom toy show! Artist reception is 7-9pm, with additional viewing hours 2-5pm on Saturday.
Posted by Steve Talkowski at 11:13 AM 2 comments:

I'm burning the midnight oil putting the finishing touches on my entry for the "World Of Imagination" show at APW Gallery.   What, you thought I was gonna spill the beans?  Gotta hit the opening this Friday night to see how it turned out!  ;)
Posted by Steve Talkowski at 12:30 AM 5 comments: 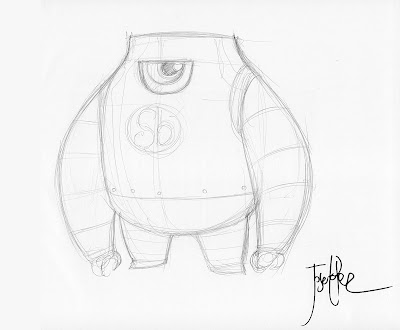 Alright, one last post before hitting the sack and closing out the busy week.   Since I've been attending these recent shows and conventions, I've noticed fans would bring a sketchbook dedicated to getting signed ("tagged") by their favourite artists.  I, too, wanted to approach those I was interested in to contribute to my personal sketchbook, and occasionally, got to draw in theirs as a trade.  Looking back over the 3-day convention, I was surprised that I got as many beautiful drawings as I did.
I've become a HUGE Jose Lopez fan, and was totally blown away when he asked if he could draw my Sketchbot character.  What an awesome interpretation. Thanks again Jose!

You can view them in all their high-resolution glory at the following Flickr set.  Enjoy! 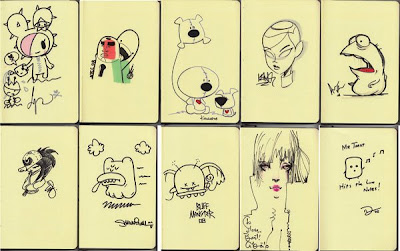 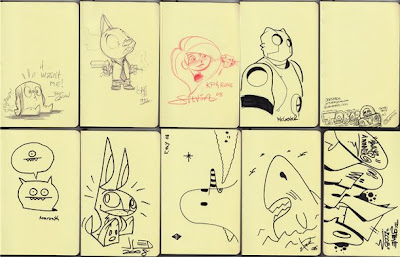 Got an early start this morning and day three was as jam-packed as the previous two. Continued to make some great contacts and meet some of the big names in the vinyl community. Sam Fout has been a personal favourite, and I was fortunate to chat with him for more than a few minutes while he added a drawing to my sketchbook.  His Project:Neptoon is not to be missed.  Read Sam's blog here.

Another amazing person to finally meet is local artist and Brand Studio Press publisher Alberto Ruiz. He appreciated the fact that I help keep him in business, as I am constantly stopping by Forbidden Planet to see which new volumes he's got out - and leaving with many purchased copies each time! ;) Alberto maintains a very active blog that is an entertaining read, so check it out when you can.  Though, before you do, feast your eyes on Alberto's killer skateboard laser etchings at the bottom of this post.

His booth neighbor was none other than Stephen Silver, a very talented and prolific character designer. I first became aware of Stephen's work at Siggraph a few years ago, where I first obtained a volume of his sketches. He's also got a very thorough blog that is inspiring to visit on a regular basis.

I also met Joe Spada, who was selling his limited edition TOBOR character, which can be found here.
Final NYCC pics now up on Flickr. 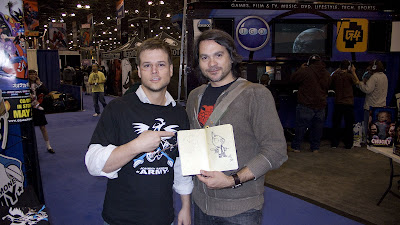 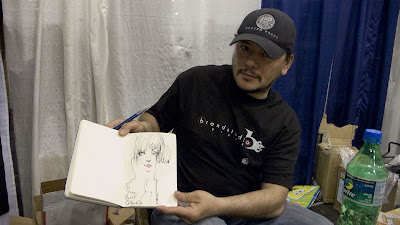 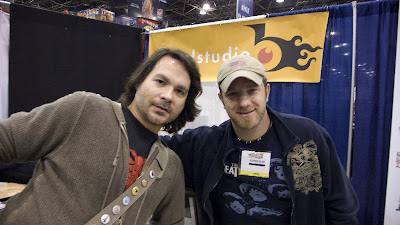 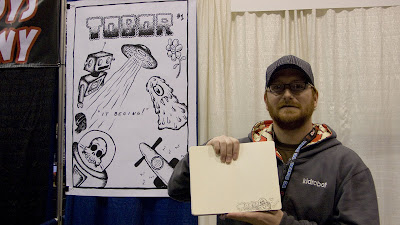 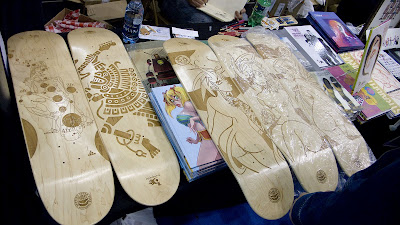 Posted by Steve Talkowski at 9:43 PM No comments: 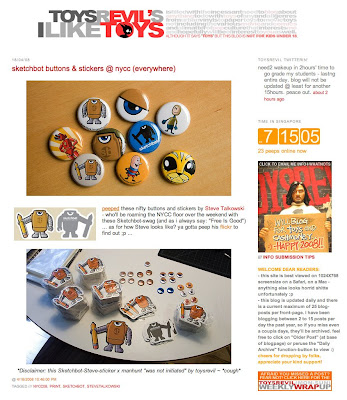 This afternoon I ran into Saki-Waki on the NYCC main floor and she asked me if I had seen ToysREvil's blog post from Friday. I had to confess that I did not, as I've pretty much been at Javitz straight through the weekend and have only jumped online to upload my pictures and make a post here and there. Well, I just got home after the show ended on Sunday night and was totally impressed that I got mentioned on the ToysREvil blog! Huge shout out to Andy for the mention. If you're not already familiar with the blog, please check it out.
Posted by Steve Talkowski at 7:42 PM 4 comments:

Day 2 was panel day for me. We hit the Indiana Jones/Star Wars panel first. Didn't see too much more from Indy, though we did see a great trailer for the all CG Clone Wars feature coming out this Fall. It looks great!

Next was director Timur Bekmambetov talking about his latest film, Wanted, starring Morgan Freeman, James McAvoy, and Angelina Joile as super assassins. Based on the comic book, the action we saw did not disappoint.

Following Wanted was the main cast for Hellboy 2! Guillermo del Toro is great to listen to in person, and we got a peak at the new, extended trailer. When the lights came back on, the stage was populated with at least 10 new characters from the movie, all life-size creature costumes with movement. The crowd went nuts.

The last panel we saw was for The Incredible Hulk. Director Louis Leterrier (Transpoter 2) and Tim Roth(!) were onstage to discuss filming. We got to see an entire sequence of the CG animated Hulk going up against Roth's Emil Blonsky (pre-Abomination stage) This finally put to rest any fears I personally had about the new version of the Hulk being anything less than totally convincing on screen. And - it's true - Tony Stark (Robert Downey Jr.) makes an appearance. I love the fact that the cross-over from the comic book world finally makes it to the big screen! Should be interesting to see how this plays out. We were told if both The Hulk and Iron Man do well at the box office (and, honestly, I don't see how they could fail) there's always the chance that we could see an Avengers movie. Overall, this is going to be an amazing Summer for films based on comic books.

I had the honor of tagging the 20" MAD*l at the MPH booth (not to mention getting both Toy Qube and My Plastic Heart's NYCC exclusive MAD*L's!)
I also got some amazing sketches by Buff Monster, Shawnimals, Dan "Mr. Toast" Goodsell, Jose Lopez (who asked if he could do a version of my Sketchbot - "But of course!"), Scott Wegener, and my good friend and Dookie-Poo creator Manny Galan!

Hit the ever growing NYCC Flickr set for more! 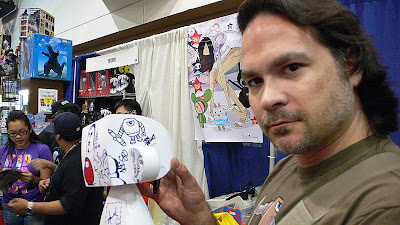 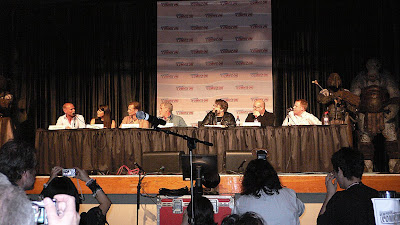 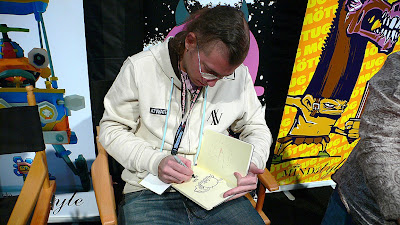 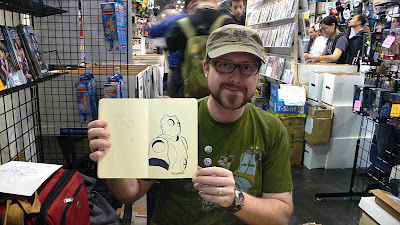 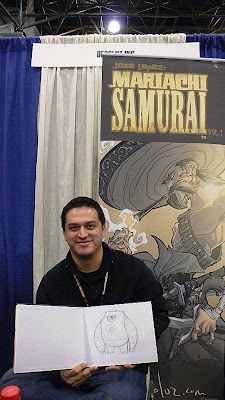 Posted by Steve Talkowski at 6:53 PM No comments: